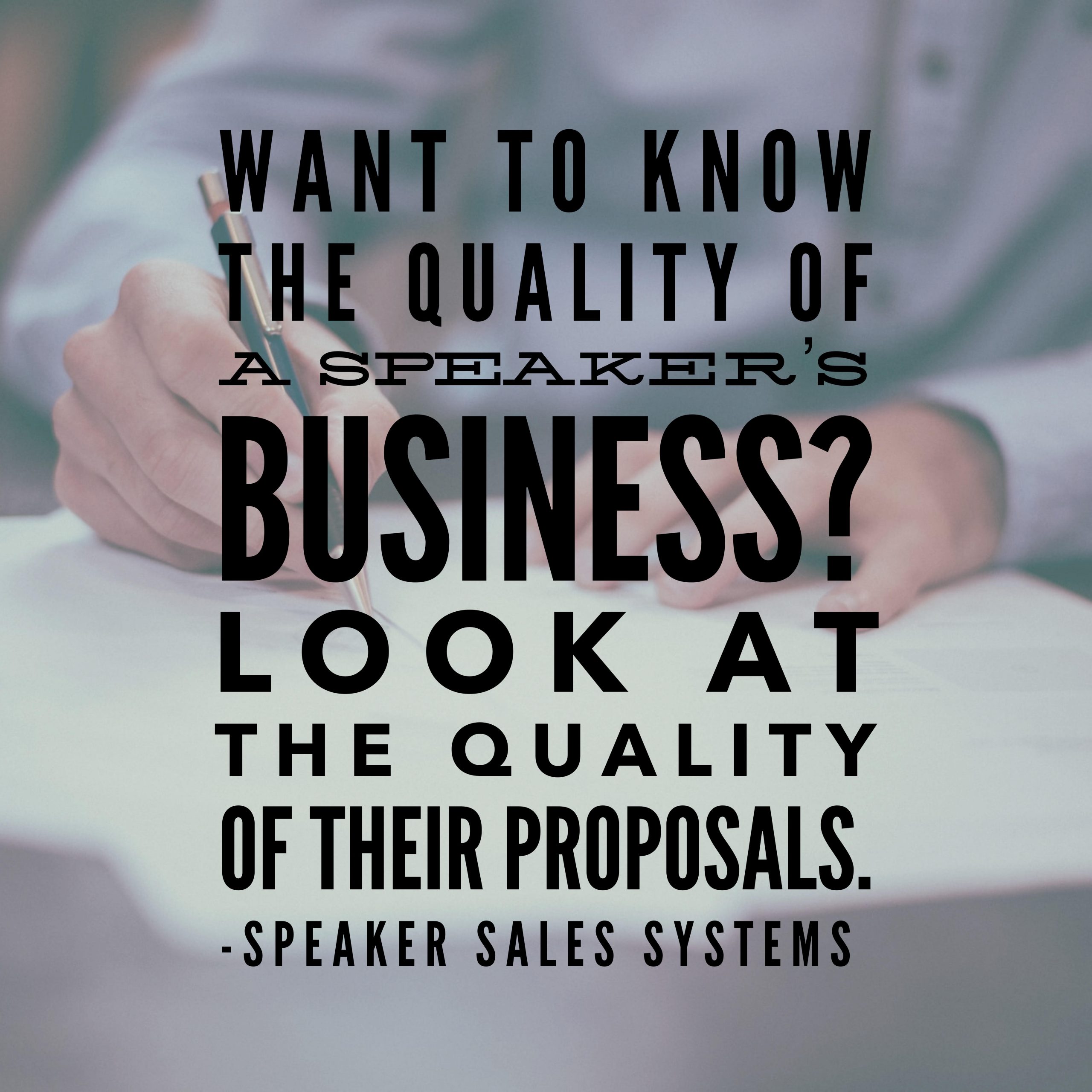 When we look at the most critical step of the sales process professional speakers engage in, there isn’t one – but there usually is only one document during the sales process that’s exchanged between the speaker and the organization that might hire them:

Many speakers are great at wowing the meeting planner with their charisma, but fall flat (and lose revenue/the entire sale) with their proposal.

As we’ve examined hundreds of proposals and sales (both won and lost), we’ve found that proposals don’t just fail when they’re sent – there are areas both before, during and after the proposal is sent where speakers lose the sale.

We’ll examine each in turn so you can shore up the gaps in your proposal process, capture more revenue and make a bigger impact by getting on more stages.

(Interested in making your proposals more profitable? Then you’re going to want to sign up for our next FREE Masterclass. Register HERE)

Before The Proposal Is Sent
We see many speakers’ proposals lose them the sale before the proposal is ever sent, and it comes from not dealing with the ultimate decision maker. I’ve personally heard ‘Send me your proposal with pricing and we’ll let you know if we’re interested.’ When those words are spoken (especially early on in the sales process when you haven’t discovered their audience’s challenges), you can almost guarantee you aren’t dealing with the final decision maker – merely their gatekeeper. You can guarantee if you’re not dealing with the person ultimately responsible for a great event, you’ll be shopped on price, not value.

If they have any other call to action than ‘sign here and send the check there’ they’re likely discussion documents. By giving our buyers an overwhelming number of options, breaking options down into line items with pricing for each, or including extraneous things like bios and onesheets, you are asking your decision maker to lengthen the selling process as they’ll have additional questions about which options they want to go with and at what price-point.

The way to avoid your proposals becoming discussion documents is to cover all the discussion points in your sales conversation (you are having an actual conversation with your decision makers before sending proposals, right?). Things such as options, value-adds, books, etc. are covered in that conversation. This way, your proposals are summations of what the two of you agreed would be the best package to serve their event, not a litany of all the choices they still have to make to consider using you as their speaker.

There are many more ways speakers mess up their chances of closing sales before sending their proposals, but the final one is price. Many speakers send over their standard pricing package without discussing budget with their buyer, and this kills revenue in two ways: 1. You might have a buyer with a larger budget than what you sent, which means you lose out on capturing that revenue by adding additional value with breakout sessions, books, etc. 2. Your buyer might not have the budget to afford your ‘base’ rate and will turn down your talk, even though you might have been willing to remove some items from your keynote and accept their lower budget. Each negative outcome results from speakers not talking about budgetary ranges before sending their proposals.

In The Proposal Itself
There are a few critical areas that speakers mess up during the proposal itself that lengthens the sales process, confuses buyers, and costs revenue.

First, and closely related to the point above, speakers include too many options. We’re advocates of doing away with the gold/silver/platinum tiered packages and simply offering the platinum package or whatever you can include to meet the buyer’s pre-discussed budget. Options encourage decision makers to match you against other speakers’ options and shop you on price if you make the mistake of breaking your options into line-item pricing.

Second, speakers have big egos as a rule – not a bad thing when you’re in front of thousands of people in a room, but deadly for sales when you think your life story has to be included in your proposals. If you’ve gone down the sales road to have a proposal requested and you know the challenges of the audience and budget of your buyer, you better believe they’ll take the time to look at your website/speaker reel/bio before cutting you a check (either before the sales conversation or after receiving the proposal). Don’t muddle the one document you need quickly executed by packing all your publicity materials into it.

Third, and perhaps most important, is speakers for some reason often give up valuable negotiation positions right out of the gate with their payment terms. I’ve seen speakers offer, in their initial proposal, payment terms of ‘half now, half 30 days prior to the event’ of something similar. For the love of god and your bottom line, why?? Think as a business owner: Is money better off collecting interest in your bank account or theirs? This is why we establish the best position to start off with in our payment terms of ‘full fee due upon execution of this document to secure the date on my calendar.’ If the buyer can’t/won’t pay full fee up front, now you have leverage you wouldn’t have if you start negotiating from a weaker position. Of course I’m willing to accept less-advantageous payment terms for my speaking gigs, but you better believe I’m asking for something in return (testimonials, guaranteed referrals, extra nights on site, etc.).

Fourth, speakers are usually horrendous at driving scarcity and immediacy with their keynote sale. ‘Whenever you get around to making a decision, let me know,’ is a great way to live feast-to-famine in a business model. Personally, I want to know whether those event dates are locked in or whether I can release them sooner, rather than later. To achieve that in the proposal itself, we offer to place a ‘soft hold’ on those event dates until X date when they expect to make a decision (more on that below). This accomplishes two things: Lets buyers know I am a professional and respect my time and theirs, and gives me a reason to reach out before and on X decision date to follow up.

Finally, speaker proposals often don’t have a clearly defined call-to-action that gets payment in the mail (usually the case with discussion document-type proposals). Speakers will sometimes write, ‘please let me know if you have any questions and we’ll look forward to hearing from you.’ That’s a lovely way to write a proposal if you’re running a heavily subsidized non-profit, but if you’re running a business, make the decision simple and obvious: Sign here, send money there by X date.

During the sales conversation, we always ask when they’ll be locking in a speaker for the event we’re discussing, so we can get their proposal to them in plenty of time for review. That date also determines our follow-up date. About a week prior to their ‘decision date’, we ensure our CRM tags us to reach out via phone to our decision maker so we can answer any questions, ensure they have all they need to make a decision, etc. While some may consider that as a pushy move (if so, you must be new to Speaker Sales Systems), we’ve more often gotten the feedback of ‘Oh, thanks for reminding me – XYZ came up but I’ll get that proposal back to you today!’

Sweet music to any professional speaker’s ears. While proposals aren’t sexy in and of themselves – if they’re well done they generate more impact and income for speakers. That, my friends, is as sexy as it gets.

Love this content? You’ll never believe what we’re giving away in our free masterclasses each month! REGISTER HERE.